About the World Spa & Wellness Awards

Launched in 2012, the World Spa & Wellness Awards recognises and reward the work that spas do around the globe, honouring hotels and resort spas in Western Europe & Scandinavia, Middle East & North Africa, North & South America and Asia & Australasia. One of the leading honours in the industry, the awards, which are FREE to enter, acknowledge excellence of care, service and standards and aim to inspire spas around the world and serve to raise global industry standards.

Organised by UK-based Professional Beauty group, which has organised spa and beauty industry awards for the past 19 years and has an in-depth knowledge of the field, the World Spa & Wellness Awards incorporates a thorough and independent judging process in which all spas are assessed by experienced industry professionals. As part of the comprehensive judging process, all shortlisted spas are visited by an official, possessing detailed knowledge of the region they are judging – during the second round of judging.

Previous years’ winners include leading international spas such as Kamalaya Wellness Sanctuary & Holistic Spa in Thailand, One & Only Spa at One & Only Palmilla in Mexico and The Spa at Mandarin Oriental Washington DC, USA.

"We are so ecstatic and very excited about winning this award. It's a great honour to be recognised and such an achievement. This is a very prestigious international award and we feel it will be greatly beneficial as it makes our spa stand out and makes us a role model for future standards to be set"

Jackie Armitage, Spa Manager, The Spa at The Oyster Box 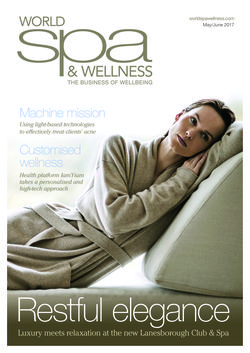 Welcome to the global home of spa and wellness.  World Spa & Wellness produces market-leading international conferences, magazines and awards.  Find us in the UAE, the UK and South Africa.